G’Day Casino a Down Under Treat

G’day Casino is one of the first of its kind to cater to a more Aussie demographic. The logo is the first indicator of this as it features a friendly kangaroo. Despite its passion for the down under, G’Day appeals to people worldwide and has quite the selection of slots (pokies) from jackpot to NetEnt slots as well as live casino games, scratch cards, bingo, keno and sports.

The interface is bright and fun and there is no shortage of games. Users will not have a hard time finding something that suits their needs and desires as the site’s offerings are extensive and up to date. 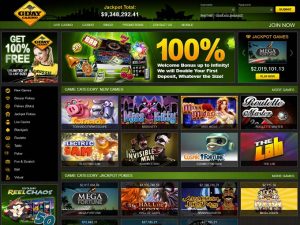 kies are the center of the G’day universe as the site features three sections of slots including ‘Bonzer Pokies’, ‘Pokies’, and ‘Jackpot Pokies’. Pokies are an Australian term for slots, so if you don’t recognize the term, don’t worry. You will recognize the games as the site features household names like Starburst, Foxin’ Wins and Merlin’s Millions. The money is in the jackpot pokies as this is where players can win big with progressive jackpots.

Though slots/pokies are their forte, players can look forward to seventeen types of blackjack and a dozen versions of roulette with dolly dealers. There is also baccarat and poker under the table games section and the site also hosts a few unique dice games as well.

The standalone poker section is standard video poker with four different games. Players have access to bingo and keno and a plethora of sports as well. Sorry Aussies, the sports are not Aussie rules.

The site menu is customizable, allowing users to get the most out of their time with G’Day and to ensure that players’ needs are met. Players also have access to constant support and customer service.

The suite of games that are offered by G’Day are thanks to several of the top names in the online gaming industry: NetEnt, Betsoft, Nyx Interactive, NextGen Gaming, Aristocrat, Leander Games, Quickspin, Ezugi, Thunderkick, White Hat Gaming and Elk Studios.

G’Day has jaw dropping promos that have shaken up the online casino world. They offer a standard sign up bonus consisting of 50 free spins on the ‘South Park Reel Chaos’ slots game as well as 100 percent first deposit bonus with no limit on the deposit.

In addition to this, if your first deposit exceeds 100 Australian dollars, you wager this money at least ten times and you proceed to lose the deposit, G’Day will reimburse you … in beer. This promotion is for people residing in Australia, New Zealand, the UK and South Africa, the rest of the world has to deal with cash and buy their own beer.

For regular and returning users, G’Day runs daily promos, one for each day of the week. These bonuses come in the form of “pokie of the day” and cash back offers.

G’Day likes to keep users engaged and as such offers a mobile site so that users can take G’Day wherever they go. Users need a iOS or Android device.

G’Day accepts most major credit cards as well as eWallet, Skrill and Neteller Ukash/Paysafecard. The site operates largely with Australian dollars but offers international users the option to use several other currencies as well.

The maximum deposit is AU$2,000 daily and the site requires users to withdraw at least AU$30, but does not impose a maximum.

G’Day offers live support through a chat feature but can also be reached via email.

One of the ways we’re growing oakley sunglasses our Showtime subs is by staggering the launch dates of our original series. The season four premiere of Ray Donovan led to a Cheap nfl jerseys significant lift in streaming subscribers here in July, and looking ahead we will have Shameless, The Affair and Homeland all premiering in different months between now and January.. In addition, we have posted earnings slides to accompany our prepared remarks. Lastly, after the call, we will post our prepared remarks, an audio replay of this call, and a transcript.. The fault was reported on the Apple support forums by user oneZer01 (pictured), who wrote: ‘iPhone 6 plus rear camera is not focusing, won’t remain stable and is blurry no matter how still I get whether video or picture. Automatic or manual focus not working either, [but the] front facing camera Cheap NFL Jerseys works fine’. A reception follows. Waves of good cheap nfl jerseys feeling saturate the event as the former commanding officer is piped ashore.. Tickets are held for only a small amount of time, typically between three and five minutes. If cheap nfl jerseys you are delayed by creating your account, the ticket you select may end up being released before you finish, and you may miss your front row opportunity.. The pilot project was very successful. We are the leader in Russia in the safety and security system. The Oneida campaign is just the latest protest this year against the Redskins’ name. The online magazine Slate made headlines last month when it declared the site will no longer use “Redskins” to refer to the franchise, choosing instead to refer to “the Washington NFL team” from now on. Overall, the user interface is easy to understand and easy to use. The phone features, settings, widgets and applications are all in a natural place and simple to find. Award this trait with a trophy or certificate. Consult with a trophy shop about creating a trophy topper that features a person with his mouth wide open, or have a plaque made up in the player honor. “Billy Lynn’s Long Halftime Walk ” is not a war movie in the traditional sense. There are battle scenes, and brothers in arms banter, sure, but like its pioneering technology, on a pure story level cheap jerseys “Billy Lynn’s” also pushes the boundaries of what we can expect from this genre.The film is a precisely observed portrait of a young man slowly realizing his own trauma and agency over the course of a single football game. We have a unique split ratio. The home team gets 66 per cent of the gate and we pool the remaining 34 hockey jerseys per cent among all the visiting teams.. The more expensive ones can go as high as [$1,000] a month. What you usually get with these are dates and sex.